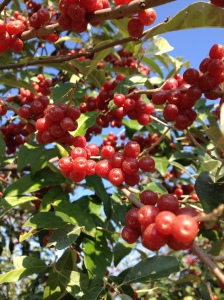 What were we thinking when we introduced the Autumn Olive?

Autumn Olive, Elaeagnus umbellate, of the Oleaster family, is a migrant from central Asia. Actually, within close proximity of our beloved fall fruit the apple, which is considered naturalized to the United States. That means it’s been here long enough to play nice and fit in well with the landscape. The Autumn Olive on the other hand, is generally not well loved in the United States and is considered an invasive. Brought over in the 1830s as an ornamental, Autumn Olive is very prolific and creates its own orchards, despite humans thinking the tall shrub or short tree is taking up more than its fair share of space.

Is it or is it not an olive?

The Oleacaea family is quite large, including privet, lilac, ash, and olive; some 600 species. Autumn Olive or Russian Olive are only “remotely” related to “true olives”. Consider them a distant cousin several times removed. They are not similar to true olives in flavor or texture. I am not sure one could convince me that they look enough alike that someone decided to name the Russian Olive and the Autumn Olive after the “original” but there you have it – someone did and it stuck. Some call the Autumn Olive, Autumnberry instead. After all, how many other berries could there be out there in the outdoors fruiting in the fall? Hmmm.

The other fall fruit.

Well as we all have been too well aware, the local fall apple harvest has not been, shall we say, “fruitful.” But there is another fruit that we can partake of – yes, that’s right, the Autumn Olive.

Wild edibles expert Sam Thayer states, “It truly baffles me how the autumn-olive remains one of the biggest wild food secrets in North America. Over vast regions of this continent it is our most common wild fruit. I have seen entire pastures overtaken with it.” Going on to say that the Chinese have long considered the Elaeagnus species to be a food source. We ought to catch up since this fruit is so plentiful. Well, times they may be a-changing for this fruit as folks scratch their heads thinking up ways to eat this abundant autumn berry. As local wild edibles expert Blanche Cybil Derby proclaims, “If you can’t beat it, eat it!”

The fruit, called a drupe, forms long clusters of berries. Though peak season in New England is September through October, I can still find berries clinging on into November. And now that the frost has hit, they are even sweeter. Before the frost the berries can taste a bit chalky. But now – Mmmm – wake up the taste buds with a sweet-tart flavor. While I am combing the drupes into my bag to save for the freezer, I am also eating them by the handful. The berries keep very well in the freezer and I can I throw a handful into pancakes or breakfast shakes all winter long and into spring. And they make excellent fruit leather too. They are high in lycopene and antioxidants – 7 to 17 times higher than that of tomatoes – so eat it up! Yes, it’s healthy and tasty.

So where can I get me some?

You can find Autumn Olive in fields, on edges, and along roadsides soaking up the sunlight. And once you learn to spot this shrub you will never not notice it. The branching system is alternate and the bark is silver speckled gray-brown and can appear to have a sheen in the sunlight. The long tapering wavy leaves are green with silver speckles and persist into late fall. The berries – small red silver-speckled – form abundant clusters all along the branches.

I may not seek to plant this apparent “noxious weed” but I am certainly going to take advantage of all this free, nutritious food hanging around! Perhaps in another hundred years or so Autumn Olive will be considered naturalized like the apple.

This article appears in the November 2016 edition of the Ashfield News.

Into the Outside is a bi-monthly feature in the Ashfield News.