Lesson of the Crocus

Does the crocus study? Investigating springtime history, computing sunlight minus darkness times mean March temperature? Calculating root depth by height needed to clear the snowfall? Or does the crocus just say, “ready or not, here I come,” and have faith in its ability to survive the cold, the weight of snow, the cloudy days, and rise up, opening to the sunlight, to be the first to greet the blackbird’s return?

The cute crocus, of the iris family, is not a native of North America. It heralds from far away, across the sea; from central and southern Europe, North Africa, the Middle East, and Central Asia. Yet, despite its non-native, though naturalized status, the crocus is the flower we look for when we look outside for spring. The other flower, also not native, is the snowdrop. These little wonders will even pop up while there is still snow on the ground. They emit a beacon, “SPRING SPRING SPRING,” that our brains reply with excitement, “YEA, SPRING IS HERE!” And then we have a major snow storm. (I am still waiting for that and about to give up hope with 70 degree weather on March 9th.)

While the Spring Equinox, on March 20th, (the author’s birthday) will provide a specific point in time when there is a moment of equal night and equal day before daylight slowly lengthens its time, spring will come in fits and bursts and not all in one moment. Crocuses and snowdrops teasing us. Forced bulbs tantalizing us. But watch our New England

Our woodlands will tell the tale of spring’s rebirth. Our native early spring wildflowers such as hepatica, bloodroot, and wake-robin trillium, don’t appear until April. Shortly after, trout lilies and spring beauties carpet the forest floor. Then spring comes into full swing, dancing towards summer.

Then again, with the odd weather we are experiencing this year, who knows, they all may make an earlier appearance. Keep watch in the woodlands this March.

More than Just a Fair-Weather Friend

The American Robin, of the Thrush family, is also a harbinger of spring. People see robins in their yards and suddenly – “IT’S SPRING!” This native, large, orange-breasted songbird’s range extends across North America. And though their summer range stretches into Canada, their year-round range is here in the U.S. That’s right, they are always here in New England – all year long. Well, some do migrate further south, but we do have several flocks who stay in the area, somewhat nomadically. During winter storms, like any other animal who is active and sticks around, they seek cover. Or they attempt to outfly the storm. Robins can reach up to approximately 30 miles per hour, covering up to 100-200 miles in a day. When winter weather is on the way, the flock may take cover in the forest or fly to a region not experiencing the storm as severely. 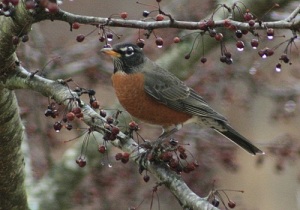 So how did the robin get the distinction of being the first bird of spring? Some old wives’ tale. (Who were those old wives anyway?) Apparently we have not been paying attention. (So pay attention.) Robins follow the food. Though we may observe them pulling naturalized earthworms up from our yards in the spring and summer, robins are omnivorous. During the winter, while the invertebrates are underground, beneath the snow, the robin switches to low-hanging fruit. Literally. They will consume whatever fruit remains on the vine and in the bush. Including overripe, freezing, thawing and refreezing, fermenting fruit. Yep. You are quite likely to meet up with an inebriated robin at this time of year. Perhaps that is how we came up with “rockin’ robin” – by observing drunken robins falling off branches and weaving about on the frozen ground. Rock on, Robin!

This article appears in the Ashfield News March 2016 edition.