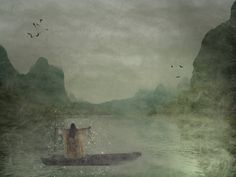 Upon reading the legends of Morgan Le Fey there is no reference of her death. What happened to her? Perhaps she retreated into the Lands of the Sidhe. Perhaps she still lives, dwelling amongst the Faie in Avalon.

But Avalon was swallowed by the mists of the Lake. And where was that Lake? That Lake that led to Avalon?

There is evidence to suggest that the wetlands surrounding Glastonbury were where Avalon used to be. As I state in my novel, Hearken to Avalon, Glastonbury is “up, down, and wet.” Being just over 500 feet above sea level, Glastonbury has experienced severe flooding of its lowlands over the centuries. There are moors and marshlands and swamps surrounding a dramatic steep rise in the topography where the Tor was built. At the time of King Arthur in the late 5th and early 6th centuries the River Brue formed a lake just south of the hilly terrain of Glastonbury. And this lake is one of the sites surmised to be the locations of Avalon. 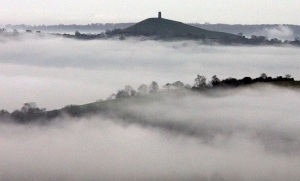 Morgaine looked around. The Tor was still standing and great oaks still lined up like sentinels on the pathway to that hill. The Lake was now receding. The Apple Orchard on the far side of the Lake from which she emerged was shrouded in mist as if it still hadn’t made up its mind which world to live in. The castle was there, still bright and shining in the sunlight. Though a magnificent feat of 6th century building, she was surprised it was still standing, that the spell had held so long. “Ah, Camelot. The years have been good to you, haven’t they?”

But if this “Isle of Apples” was an island, 20 miles inland from the sea, where did it go? Over the centuries, the sea retreated and the Land pioneered into the Lake, creating a rich agricultural promise.

In the 1190s, when Hearken to Avalon takes place, the Lake remains, though smaller due to breeches in the levels. The Land called Avalon is in flux, as if it had its own thoughts, assessing whether to keep cloaked against the chill of prejudice against the Goddess. 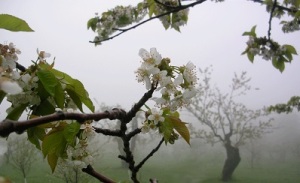 “…either I am dreaming or we are on the shores of the Isle of Apples.”
“There is no island anymore, but the Apple Orchard remains. The Land is still in flux and somewhat out of time.”
“Out of time?”
“I am not entirely sure how to explain this phenomena in a way that will make sense. Because it really doesn’t — make sense that is. But somehow when my namesake lifted the mists to wed Avalon back to the mainland, not all of the Land complied. Some of it, the Orchard in particular, is out of phase, even within itself.”

So where did Avalon go? Back into the mists. Back into legends. Back into our imagination, where it lies in wait to rise forth again.

This is Hearken to Avalon!