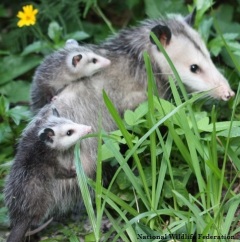 As the snows melt into the forest and the grasses grow in the fields, take time to stop and look and listen to the lives unfolding all around you: harried bird parents flying back and forth from the nest to feed their young; hungry chicks begging for food, with mouths agape, as their parents arrive at the nest; tadpoles wriggling in the vernal pool; bear cubs climbing a tree; fawns suckling on their deer mother’s teats; and a mama opossum waddling down the road with joeys on her back. What special moments have you stumbled upon? What scenes stop you in your tracks and pause – breath held – in awe? 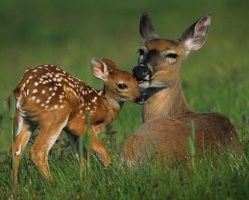 Though many song bird babies are simply called chicks, birds of prey such as eagles are eaglets and owls are owlets, whereas waterfowl, such as ducks, are ducklings, and geese are goslings. Snakes are snakelets or hatchlings. And spiders are spiderlings. Do any of these “-ets” or “-lings” make these wild babies any cuter?

What features have you noticed that differ between baby and parent? You may know that it’s safe to get behind a skunk kit but you’d better be over 10’ away from the adult. And that caterpillars and butterflies don’t seem to resemble each other at all – for example monarch larvae have yellow and black stripes whereas the wings of monarch butterflies are orange with black outlines. And have you noticed that though dragonfly nymphs look like they don’t have wings as they walk under water – they do – they are folded up and look like a hump on their back until the last molting when they climb a blade of grass, split their exoskeleton down the back, emerge, and pump air into their strong wings.

Crows, bobcat, and cougar are born with blue eyes. As this corvid and two felines mature, those eyes will change color – for the crow a dark brown; for the bobcat golden; and for the cougar, their eyes may stay blue or change to golden or hazel. I have been seeking answers as to why some wildlings are born with blue eyes but others are not. I suppose some things just remain a mystery.

Have you ever noticed a brightly colored outline along a baby bird’s beak? That outline is called a gape. As the chick opens her/his mouth the bright color flashes as a signal informing parents to “insert food here”. Depending on the species, you may observe the outline as a bright yellow – such as on American Robins – or pink on American Crows. As the bird matures and the beak develops, that color will fade.

But beyond baby bird mouths to show their parents where the food goes, wildlings must blend in with their surroundings. Songbird chicks tend to look like grey-brown lumps in their brown nest, keeping quiet until their parents arrive with more food. Fawns have spots to mimic the dappled sunlight AND they have no scent, so as long as they lay still, they have a good likelihood of being overlooked by a predator. Predator babies also need to blend in – both bobcat and cougar kittens also have spots like the fawn, and like the fawn, as these cats mature those spots will disappear.

So much to notice out here in the great outdoors! Come on out into the outside and explore!

Into the Outside is a bi-monthly feature in the Ashfield News and Shelburne Falls & West County Independent. This article appears in the May 2018 edition of The Ashfield News.