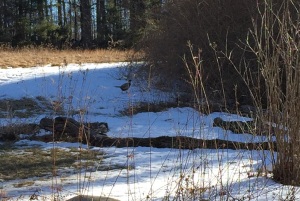 The Ring-necked Pheasant, Phasianus colchicus, is a handsome-looking chap. This member of the grouse family (Phasianidae) has iridescent copper-gold plumage with a long tail – brown with black markings. He is aptly named due to the white ring around his neck. He also sports teal-colored feathers on his head as well as a red sideways heart-shaped marking around his eyes.

One particular pretty-boy showed up in the swamp by my home this past fall – a survivor from hunting season. Though a released game bird heralding originally from Asia, I’ve heard tell of pockets of breeding populations in New England and New York. In recent years I have only seen a few males in the wild. Of course they are way more colorful than the females and parade around announcing themselves quite loudly (reminiscent of a peacock call) so the camouflaged females may just be hiding in plain sight. I find his call quite humorous. It almost sounds like he is crowing “au-dit” – which won’t win him any popularity contests as we enter tax season. I presume though that he is not calling out longingly to accountants but in search of a lady friend. I haven’t seen any females in the vicinity. I wonder if birds experience ennui if they don’t pair up.

Ruffed Grouse, Bonasa umbellus, another member of the grouse family (obviously), are native residents to New England, Canada, and the northwest. Both males and females are dappled brown and grey with black markings. They camouflage well on the deciduous forest floor. So you usually either hear the males’ drumming in the forest or practically stumble upon them before they fly up and out of your reach. This drumming that the males do, is a fast boom-boom-boom sound which is made by the bird quickly rotating his wings forward and backward. As he does “air rushes in beneath the wings creating a miniature vacuum that generates a deep, thumping sound wave that carries up to a quarter of a mile.” (Allaboutbirds.org) Males drum both to attract a female during mating season in the spring and to declare his territory. Last spring two male grouse were having at it on my road. It was an all-out squabble with puffing up of chests and running at each other. They almost looked like tiny sumo-wrestlers bouncing off each other’s bellies. As I was running late for work, I rolled down the window, honked my horn, and asked them if they kindly take their disagreement off-road. Thankfully, they complied.

Ah, the American Woodcock, Scolopax minor, also called: timberdoodle, Labrador twister, night partridge, and of all things – bog sucker – live in forest edges, successional fields, and wet meadows throughout the east coast. In the spring, these birds return to their breeding ground in New England and males commence their curious mating display in overgrown fields. Once you hear the nasal “preent” sound, watch the sky as he whirls up over 200’; on his descent he will chirp intermittently. Land and call out “preent” again before his pushes aloft for another areal display. Both males and females are small plump balls of feathers and are well-camouflaged with plumage looking a lot like decomposing deciduous leaves.  They are short-legged and sport a long thin beak. Their long flexible bills probe the soft earth for invertebrates. They have large eyes that are positioned high and towards the back of the head, making them well adapted for watching the sky while feeding on the ground. Watching them have their heads pointed down while slowing walking, I wonder if they ever trip over their own beaks.

All three birds are game birds and hunted for their meat. I have only ever sampled pheasant – once, last fall – but obviously not my neighbor. I have become quite fond of this pretty-boy, protective almost, and root for him daily that he’s made it through the night and avoided another neighbor of mine – the very cute – but not-easy-to-cuddle slinky-like mink who skulks around the stone wall and barn. I of course want the mink to eat too, just not my pheasant. Or Chippy. Or Red. Or Chickadee.

Oh dear, what is poor mink to eat? MICE! You can eat them before they find their way into the house.

Meanwhile, while the mink is hunting the mice, head out into the outside and enjoy the sights and sounds of March!

Into the Outside is a bi-monthly feature in the Ashfield News and Shelburne Falls & West County Independent. This article appears in the March 2018 edition of The Ashfield News.