Heroes and villains are in the eyes of the beholder and the writer of the story.

Guy of Gisbourne, notorious villain – right? Morgaine of Avalon, evil sorceress and half-sister to King Arthur – her legacy was lost in the mists – correct? Whose stories are written down and saved is determined by those in power. And who is cast as a hero or villain is by the promoter of the tale. Something welled up in me, as if these characters demanded a revision of how they were cast centuries ago. And so, Hearken to Avalon was born.

But even when the tale was told the story didn’t end where I left it. (Yes, a sequel is in the works.)

We no longer yearn for the just fairy tale happy ending. We want more. We challenge our heroes and villains. We want to know what happens after the ever-after. We want to hear the back-story on the characters. Why did they become a hero or villain? What defines them?

And so I created a workshop to deeply consider how we define our parameters of what we think makes someone a hero versus a villain. The following is a do-it-yourself adaptation of the workshop. May you enjoy your explorations… 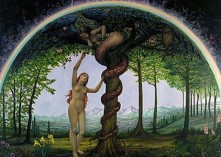 Messing with the Polar Opposites Paradigm

REFLECT on the following polar opposites and jot down or draw a few ideas for each pair:

CONSIDER: With regard to the words positive and negative – Negative ions are great for you. A positive feedback loop is dangerous to the environment. Dark equals night – ah bedtime; sleep. Light equals day – um work…or play.  And who is to say that dark equals bad or light equals good. You can be blinded by the light or you can be sheltered in the darkness of the night. And let’s just go there shall we? White and black magic – terms we should avoid as they smack of racism when white equals only good and black equals only bad.  White can be used to cloud like a fog or purify like light. Black can be used to absorb, banish, and destroy bad memories and deeds. It is not always what the stories tell you. Good and evil are the only polar pair that is consistent in meaning. Or are they? 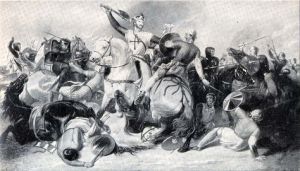 QUESTIONS to respond to:

CONSIDER: It is all about perspective is it not? Consider the story of Robin Hood. He was considered a hero by many for stealing from the rich to give to the poor. So in this scenario stealing is okay. But is it really? It’s still stealing. Consider the legacy of King Richard I. He is hailed as the “Good King Richard” and the “Richard the Lionheart”. But how often it is revealed that on his coronation day he barred both women and Jews from participating in the ceremony, and that those Jewish dignitaries who were in attendance were stripped, flogged, and banished from court; and that these actions incited a slaughter of Jews in London. So in this scenario killing is okay when it’s someone whose beliefs you don’t agree with. But is it really? It’s still killing. Is someone bad just because they pray differently from you or call to their god by a different name?

QUESTIONS to respond to:

“It doesn’t matter what you call me – villain or hero – I am here to fulfill what I am meant to do. And though the future may judge my deeds, know that whether I am deemed a hero or villain, I did not stand by and do nothing. I made my choice and I can live and die with that.” ~ Hearken to Avalon 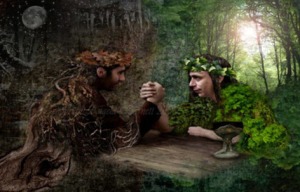 HOW NATURE puts it into perspective: When you look around, how does Nature appear to you? How do the “polar opposites” manifest? Do you label any of Nature’s cycles, processes, or activities as good or bad? Why or why not?

CONSIDER: Do you have the courage to do what Nature does? When it’s time for something to end, the frost comes and you are forced to let go all that cannot survive. Is there something in your life that you need to release, let go, allow to die?

Do you have the courage to do what Nature does? When it is time for something to begin, the shoots push through the snow and dirt, ready or not. Is there something in your life that you need to allow to grow?

There is nothing good or bad in life or death or rebirth. These are transitory states that just are… and then are not.

be – YOU – completely, utterly, unapologetically you!