What is in a name
The word “turkey” first was applied to the large ground-dwelling American bird in England in the 1550s because it was (mis)identified with a specie of guinea fowl that came from Spain by way of North Africa, which was at the time under the Ottoman (Turkish) empire. The name “turkey” stuck to the American bird, which is curious because the Aztecs were the ones who domesticated this bird and introduced huexolotl to the Spanish, who then introduced the American bird to the rest of Europe. But then when the English landed on the eastern shores, there was the turkey bird that had already been imported so the English did not bother recording any Native American name for turkey. Then when the English saw a red-headed large black bird that resembled the turkey, they named this vulture a turkey vulture. And of course, while walking in the woods and stumbling upon a fungus that fans out like a turkey’s tail and has similar coloration, well, this mushroom then came to be called turkey tail mushroom. And all because of a misidentification with a fowl from another continent.

Turkeys
I think I know where that expression, “Hey, get out of the road, you turkey” comes from – as I drive the back country roads, I am often needing to stop to wait for the turkeys to cross the road.
The turkey, Meleagris gallopavo, is a native gamebird, in fact, it is the official game bird of Massachusetts. It is sometimes considered to be in its own family Meleagridinae (as other family members are extinct), though one may also find Meleagridinae considered to be a sub-family of Phasianidae, the pheasant family, which includes chickens, partridges, peafowl, and pheasants, in the order Galliformes. Galliformes are heavy, ground-living and ground-feeding birds who tend to run away from trouble instead of fly away. Don’t get me wrong, turkeys and most other wild gamebirds can fly; they just prefer to make their best attempt at outrunning the predator chasing after them. However, turkeys will roost in trees at night to avoid being preyed upon while they sleep. Most birds in the pheasant family tend to be non-migratory, and the males are more colorful than the females. Consider the tom (male turkey): while his general coloration is shades of brown and black and similar to the hen, he sports a bright red wattle, which is a fleshy growth below his beak and a long “beard”, which overhangs from his breast. And when he struts you may see a flash of bright blue on his face.

Turkey Vultures
As I sit out in the garden stooped over weeding, I see a shadow circling and I look up and there is a turkey vulture. A yell up to the bird, “I’m not dead yet.” Turkey vultures, Cathartes aurahave, of the New World vulture or condor family, Cathartidae, have an amazing sense of smell and keen eyesight. Perhaps I was smelling overripe from my labors or looking like I was about to expire from the heat. But I was in no danger of getting preyed upon, as vultures mainly eat carrion, i.e. dead animals. Given that vultures eat dead animals and not wanting to get their plumage all bloody, both our turkey vulture and our black vulture, Coragyps atratus, have bald heads. Turkey vultures sport a red bald head and black vultures possess a black bald head. Bald head coloration is the easiest way to tell these two vultures apart. There is little sexual dimorphism as both males and females have similar coloration and size.
If you have ever been on a nature walk with me, you might have heard me exclaim, “Look, up in the sky – a tv!” People look up, perplexed, thinking to see a television poised miraculously in thin air. But nay, ‘tis a big black bird on the wing. The participants look from me to bird and back again. “See? A tv. A turkey vulture.” (I know, we naturalists have an odd sense of humor.) Turkey vultures love riding the thermals and you can see them teetering in a v-shape as they soar up in slow circles along the air currents that are able to keep this heavy bird with a 6’ wingspan aloft. If you are ever able to notice them taking off in flight, you may observe their silvery underwings. Northern populations are migratory, which is why it is rare to see them during the winter months.

Roosting Fungi
Turkey tail mushroom, Trametes versicolor, in Polyporaceae, is a shelf fungus forming on dead logs and snags in a fan-shape. As their name suggests, these fan-shaped fungi look like turkeys’ tails displaying. Color bands include browns, beiges, grays and plum tones. Edges will be the lightest color. To the touch this fungus feels leathery. Looking underneath, the surface will be white to beige with very tiny pores. A magnifying lens may be required to confirm pores. Turkey tails have no stems but attach directly to the dead wood. When conducting a spore print, use a dark colored paper because the spores are white.
Turkey tail rosettes can be collected for medicinal purposes to be dried, ground, and decocted into a tincture. Rosettes can also be gathered fresh for tea. Turkey tail mushrooms are not palatable enough to be considered edible; they are simply too tough, so I would not suggest wasting the butter to sauté them. Best to use them for what they are good for, which is balancing healthy gut bacteria and boosting immune systems. Turkey tail has been used to support cancer treatment. There are look-alikes so it is important to have positive identification, though at least no other Trametes are considered poisonous but most are considered inedible.

Whether you are looking up, looking down, or looking all around, enjoy the woods this fall! 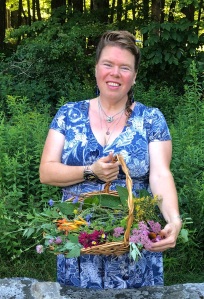