Last summer I was noticing quite a few rabbits around our home. They seemed to be breeding, well, like bunnies. And they ate all our strawberries and then our Brussels sprouts! There has got to be checks and balances. Who would balance this equation? Meet Bobbi. Bobbi is a bobcat (Felis rufus) who moved in over the winter. One morning I woke up to find bobcat tracks – that distinctive asymmetrical “catitude” paw print that is just slightly larger than that of a domestic kitty – trailing alongside rabbit tracks.

Over the coming weeks I followed Bobbi’s tracks all around the yard and into the woods. I even found a kill site – a place where Bobbi ate a rabbit and left some fur and a foot. Who said all rabbits were lucky? They aren’t if they are missing feet – or their lives for that matter. Then Bobbi started showing up at the neighbors eyeing their chicken coop. Oh dear! But thus far the rams and Lisa’s broom have kept our frisky feline at bay. I even found where Bobbi had stepped into my prior tracks as if to say, “Oh yeah, now

look who is tracking who.” Yes, that is “catitude” for you. Consider how humans use the middle finger and you will get why trackers quip “catitude” in reference to the asymmetrical paw print. Only felines have it.

Meanwhile with no rams or brooms to protect the rabbits here, Bobbi has been kept well fed throughout this winter.

Now if you are out there in the outside looking at animal tracks and wondering, how to tell rabbit tracks from gray squirrel tracks, upon initial observation, do you notice that the front prints, which are actually behind the back prints, given the hopping gate, are parallel or skewed? Consider the actions of both these prey species. Parallel front paws usually denote a squirrel as squirrels are climbers and use their front paws simultaneously to grab up the tree bark. Rabbits are ground dwellers, so to get away from predators when freezing in place doesn’t work, they dodge. They place one front paw slightly in front of the other to be able to alter direction quickly. Now this isn’t to say you will always find a rabbit’s front paw tracks slightly skewed but if you track it out and follow the pattern, you will see it.

As the snows melt into spring it will become nearly impossible to track Bobbi through the yard and fields. (This is why trackers may be the only humans who love mud season.) Still, it feels good to know that Bobbi is doing his or her part to keep the balance. And who knows, perhaps there will even be a litter of kittens in another year or so.

Meanwhile, the rabbits will be reproducing, well, like rabbits. And what better time apparently than in early March. Now, rabbits do mate throughout the spring and into summer, but March appears to be special in some way – possibly just to us. As we humans come out of our dens, feeling that early spring fever, and look around, what do we see in the evening moonlight, but rabbits jumping and prancing about. What are they up to? “Mad as a March hare,” is an old English idiom stemming from those who observed the antics of hares (European hare, Lepus europaeus) in March as they chased and jumped over each other. Here in New England, our native New England Cottontail (Sylvilagus transitionalis), Snowshoe Hare (Lepus americanus), and the introduced and naturalized Eastern Cottontail (Sylvilagus floridanus) all display similar antics. Males chase each other to determine dominance whereas courting couples can been observed jumping 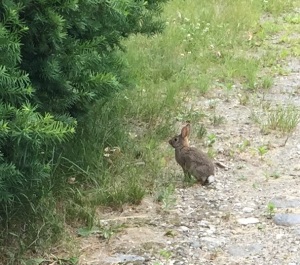 over one another. Hey, whatever gets your blood flowing, yes?

If you are looking at a rabbit hopping by, more likely than not, it is an Eastern Cottontail as they are the dominant bunny specie of Western MA. You may notice a white spot on the forehead. About half of them have it, whereas all New England Cottontails, which are slightly smaller than the Eastern, have a brown spot on their forehead. Less noticeable, unless you find the two species together, is that the Eastern Cottontail has slightly larger ears and eyes than the New England Cottontail. And wow, if you are seeing a larger white rabbit in the winter, then you found yourself a Snowshoe hare.

So while the snow persists enjoy the fresh prints through forest and field. And when mud season comes rejoice in the few more weeks of tracking your wild neighbors up and down the dirt roads and along the edges of wetlands. Happy tracking and trailing!

Bobcat
To the tune of “Dip, dip & Swing”
Words by Arianna Alexsandra Collins 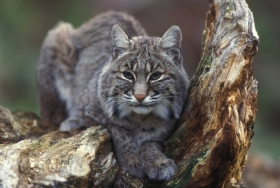 Written for the campers at Bonnyvale Environmental Education Center

Bobcat hunts with care
stalking through forest
meadow and thicket
hunting for hare.
Hunting for rabbit, rat, squirrel, and deer
bobcat leads a life of solitaire.
Bobcat hunts at night
and dens in rock ledges
sneaking bobcat is out of sight.